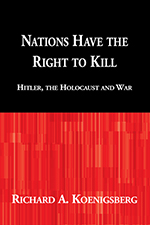 "Richard Koenigsberg's ideas on human violence and destructiveness are startling all the more for being self-evident once they have been absorbed. His ideas cut through conventional notions about culture and war, enabling us to understand human institutions in utterly new ways." —Professor Ruth Stein, New York University, author of For the Love of the Father

Review Essay on Nations Have the Right to Kill: Hitler, the Holocaust and War

By Michael Roberts, Professor of Anthropology, University of Adelaide, author of “Empowering the Body & Noble Death”

Richard A. Koenigsberg has an obsession with Hitler. It is a healthy one—directed towards exposing the link between World War One and Nazi ideology. He reveals how Hitler’s wartime experience of the community of the trenches led him to emphasize Germany’s worth and her collective goals, while demanding the subordination of individualism to the interests of the nation state. The logic of war then flowed into a logic of genocide against those viewed as a “bacillus” in the German (and European) body politic, namely, the Jews.

Just as vitally, Koenigsberg links this theme to another motif: the sacrificial ideology permeating the war programs of all the great powers in World War One – an ideology that was accepted and affirmed in the letters of French and British soldiers in the trenches who ended up as cannon fodder.

Nations have the Right to Kill is a passionate monograph that presents a searing criticism of the sacrificial ideology that mobilizes people for war and sustains such efforts for the benefit of that “magical entity, the body politic” (p. 42). At a time when the Western media and popular culture is inclined to set up the “Islamic bomber” or “Muslim fundamentalist” as a freak of some sort who is attracted to the idea of sacrificing himself for Allah, it is beneficial for Westerners to reflect on their own past. The vocabulary of mobilization deployed by state agencies on the Western home front and the vocabulary of duty and dedication affirmed by the soldiers on battlefields in WW-I are not far removed from the language paraded by Mohammed Atta or the Bali bombers.

Sacrificing self for body politic, it seems, encourages metaphors of “regeneration” and “rebuilding of souls.” The semantics of inspiration and justification draw on nature motifs. As a result, idioms and images that appear in starkly different settings—whether France in the time of World War One, Japanese mobilization for what they call the Asia Pacific War (WW-II, that is), the māvīrar (great hero) cult of the Tamil Tigers or contemporary Islamic radicals on martyrdom operations—seem to have significant similarities.

Let me elaborate through two of these instances. Guided by Brian Victoria and Emiko Ohnuki-Tierney’s expertise, one can point to the weight placed upon the cherry blossom, the chrysanthemum and the persimmon tree in the work of Japanese exhortation and symbolism during the first half of the 20th century.  The LTTE and their supporters depict their fallen heroes as vitae, that is, “seeds,” and as vittudal, namely, “bodies that become seeds.”

These related terms convey the idea of a body buried in the earth that “brings forth actual as well as literal new life (Hellmann-Rajanayagam 2005: 124).” In the ethnographic field in the eastern Province Margaret Trawick was struck by the vegetative and horticultural imagery deployed at the grass root level. So it is that Tamil Tiger posters proclaim: “We are not dead; we have been sown” (following Schalk 1997: 79).

There is deep culture at work here, albeit operating dynamically in a new setting. Steven Collins tells us that “vegetation imagery” alluding to “seed” and “root” is built deeply into the soteriology of the Indian subcontinent and is embedded within the concept of many worldly lives involving rebirths shaped by “karma-seeds” (1982: 218-24, 226).

All human beings experience their own body and its stages of progression, as well as the life span of vegetation around them. Even city-dwellers have pot plants, journey into the countryside or reflect on such processes through exposure to poetry, literature and performative theatre. Likewise, all human beings experience the transition from day to night in ways that may encourage a tendency to depict profound transformation through metaphors of “light” and darkness” or “spring” set as a contrast to “winter.” Such experiences are integral to the phenomenology of our being through the senses of sight, touch, taste, smell and hearing.

Thus nourished, it is arguable that vegetative and climatic imagery is embedded within the semantic structure of all languages. On this basis one can take another step and contend that this imagery erupts at critical moments of emotional crisis. One such occasion is where nationalist histrionics seizes centre stage, seeking to mobilize people and demands sacrificial commitment. This cluster of thoughts is my extension: but it is a bundle inspired by Koenigsberg’s material.